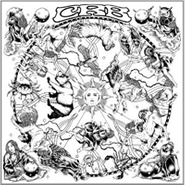 Black Crowes frontman Chris Robinson’s new band releases its second album of the year with The Magic Door, a seven-song trip down jam rock lane. Whereas the songs on the band’s previous album, Big Moon Ritual, were all extended jams, The Magic Door cuts down the length for most of the songs, thus making the tunefulness of a song like the boogie-rocking “Let’s Go Let’s Go Let’s Go” come through in a more grabbing fashion. “Appaloosa” is a lovely ballad, featuring some of Robinson’s most heartfelt vocals to date. But the band also lets loose on the nearly 14-minute “Vibration & Light Suite,” building from proggy guitar interplay to lovely, harmonic vocals and then into space-rock solo bliss. Together with Big Moon Ritual, Chris Robinson Brotherhood have provided a feast for jam band fans on The Magic Door, one which should whet the appetite for the band’s jam-heavy live shows.