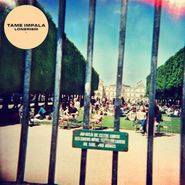 Whereas Tame Impala’s awesome first album, Innerspeaker, was all about muscle, on Lonerism the Australian band tends to build its psych-rock songs more deliberately, more delicately. But they still kick ass, and hard. “Be Above It’s” titular refrain is whispered over a tumbling drumbeat until Kevin Parker takes off with a simple, Beatlesesque melody and he and his cohorts supply fuzzed out psychedelic flourishes. Thanks to Parker’s high, nasal voice, those comparisons to John Lennon keep coming, on songs like “Apocalypse Dreams,” where Parker’s vocals and melodies certainly are reminiscent of the Fab Four, but musically they’re no mere worshippers at the psych throne, more interested in squeezing strange, new sounds out of familiar territory and taking their arrangements through multiple tempo changes, broiling them through effects, laying moogs and synths over them and then looping back to the original melody like déjà vu. Tame Impala also prove adept at producing the straightforward rock single on “Elephant,” which may draw comparisons to the White Stripes for more than just its title, but whose bass-heavy sound really pulls more from psych originators like Blue Cheer — just hookier. Parker, who produced the first Tame Impala record, as well as the recent, excellent release by Melody’s Echo Chamber, finds perfect sonic kinship in David Fridmann (Flaming Lips, Mercury Rev), who can be known for helping to dramatically change a band’s sound (Sleater-Kinney’s mindblowing The Woods, for instance) but who mostly seems to help Tame Impala sound even fuller, allowing the band’s punchiness to come through in tracks like the pop psychedelic wonder of “Music to Walk Home By,” but thickening it with layers of space-rock sound. The end result is that Lonerism hits hard but leaves a lasting impression, leaving the listener to wrap his or her head around all the wondrous sounds of the record and immediately wanting to track back and listen again.