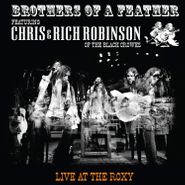 Originally released in 2007, Chris & Rich Robinson’s Brothers of a Feather: Live at the Roxy sounds as poignant and stirring as ever. This stellar reissue features sound so crisp you’d swear the guys were in the same room as you — well, actually, considering this is a compilation of 2006 era live shows at LA’s The Roxy, it probably actually sounds even clearer. It’s a minimalist affair, focused on the warm vibrato of guitar strings, the homespun interplay of the Robinsons’ voices, and the soulful delivery of backing vocalists Mona Lisa Young and Charity White. Featuring classic Black Crowes tracks as well as moving covers of Gene Clark, Little Feat, and Bob Dylan covers, if you weren’t one already, Brothers of a Feather will certainly make you a believer.