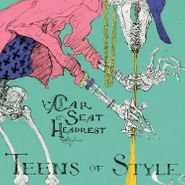 Will Toledo is the wunderkind behind Car Seat Headrest. At 22 he’s already self-released 11 albums, and Teens of Style picks some of his best work and refashions it for a compilation of sorts. Thankfully, in doing so, Toledo doesn’t completely scrub the lo-fi aesthetic that helped win him a legion of fans on the Internet. Instead, Teens of Style plays like a rock debut that’s wiser than its years, calling to mind Guided By Voices’ immediacy, The Strokes’ interlocking propulsion and Bright Eyes’ brain-spilling lyricism. There’s some reliance on scrappy production techniques, like the ghostly noise that opens the album on “Sunburned Shirts,” but mostly Toledo builds his songs on only crucial elements—direct melodies, simple post-punk guitars, bare-bones beats and a strong point of view. Toledo’s lyrics can skew emo, but lines like “I want to close my head in the car door/I want to sing this song like I’m dying” sound terrific in practice, mostly because Toledo fully commits and sounds more like a shitkicker than a whiner (those sunny, Beach Boysy melodies don’t hurt, either). Like Best Coast’s Bethany Cosentino, another young singer with a dynamite voice who similarly wears her heart on her sleeve, Toledo benefits by having his first major release in a cool, lo-fi style, but with pipes and hooks like this, it’s only a matter of time before he graduates to bigger leagues. Check out Car Seat Headrest now you can say you were into it before it was a trend.