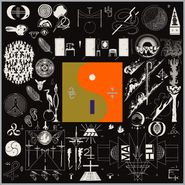 There are certain things one expects from Bon Iver: sparse, wintry melodies, bare emotionality, and his lyrical, near-Appalachian croon. On 22, A Million, those facets remain the same, albeit embellished by an unexpected experimentation. The new songs feature samples, synths, and processed vocals; one gets the sense that all the time Bon Iver spent collaborating with the likes of Kanye and James Blake managed to influence his own work, as well. It’s an interesting evolution for the soft-voiced lo-fi folksinger — an album full of surprises whose low-key loveliness will get under your skin.