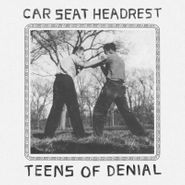 Rough and ready poppy, punky songs not too far afield from early Beck, but with their own particular punch and texture. There’s an earnest, bratty wistfulness here that works.

Taking a page from Pavement, Beck, Guided by Voices, and Dinosaur Jr., Car Seat Headrest’s Teens of Denial LP is a raw, melodic, and at times, raucous summer rock album. Songwriter Will Toledo doesn’t shy away from topics like depression and drugs, speaking intimately to the listener one moment before crescendoing into a punk rock shouting style chorus the next. There’s a lo-fi, DIY aesthetic to the album, but the sound is full and heavy, punctuated with the sudden appearance of a small brass section, swirling psych guitars, and Toledo’s insistent scream. The cathartic nature of Teens of Denial sneaks up on you; the songs are an exercise in sustained tension, often detouring into unexpected genre territory. It’s a wonderful showcase for Toledo’s arresting, insistent songwriting.