Amoeba Hollywood and Third Man Records celebrate the vinyl reissues of three classic albums by French vocalist France Gall with a record release party at 1606 Cahuenga Vinyl Bar on Friday, February 21st from 6-8pm! DJ Victoria Rawlins will spin an all-vinyl set of yé-yé (the style of music for which Gall is known) and French psych while you sip cocktails (and dance!) at this new vinyl-centric bar in the heart of Hollywood (1-1/2 blocks north of Amoeba Music on Cahuenga). C’est magnifique! This is a 21+ event.

Third Man Records is reissuing three classic France Gall albums on February 21st, bringing this music to a larger audience with the first ever North American vinyl pressings of these titles, some of the most brilliant highlights from Gall’s catalog, including Baby Pop, 1968, and Poupée de Cire, Poupée de Son. Third Man is also pressing limited-edition colored vinyl which will be available only at this release day dance party, while supplies last.

France Gall was a prolific French vocalist and performer, remembered as one of the central figures of the 1960s yé-yé pop movement. Aligning catchy, spirited rhythms with lighthearted lyrics and drawing from the beat music a la early Beatles and Hollies, the yé-yé artists promoted a sort of new freedom of expression and breaking down of social barriers in post-WWII France. 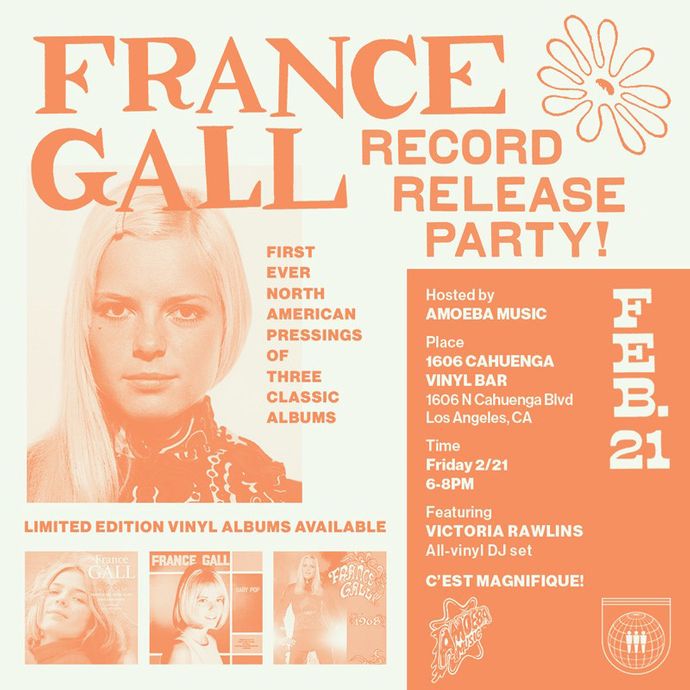