Together with Gram Parsons’ daughter Polly Parsons, Amoeba Music is releasing a newly discovered, never-before-heard Gram Parsons and The Fallen Angels concert from 1973 via a Kickstarter campaign launching November 17, 2022. This is the first Gram Parsons live club show ever released and the first new solo Gram Parsons recording to surface in over 35 years!

The discovery of this long-lost concert was nothing short of serendipitous. During the process of moving our Hollywood store to a new location, a box labeled "GP Archives" was discovered. There were some very interesting items in the box, but one in particular stood out. It was labeled GP-FA Bijou. Amazingly, it was a clear and beautiful soundboard recording of the next to last club date ever of Gram Parsons and the Fallen Angels! At the Bijou Café in Philadelphia, from March 1973. Sourced from the vocal mics, it is one of the best quality Parsons recordings that has ever surfaced and it truly captures the incredible energy put out that night by Gram, Emmylou Harris and the band. The 19-song concert includes fantastic versions of “Drug Store Truck Driving Man,” “Sin City,” and the never-before-heard Gram and Emmy duet, “Jambalaya.”

In order to share this recording with the world, Amoeba is looking for crowd-funding support to cover the costs of remastering, rights payments, cover art, album printing, and distribution.

Amoeba Co-Founder Dave Prinz said, "This is a chance for Gram fans to help bring something truly beautiful and special into the world at a time when we could all use a lift in our spirits."

Polly Parsons adds, “I love that there is going to be intentional energy put forth by all of the fans to collectively make this release happen. Community is so important and doing things together, on a massive scale, can have a giant impact.”

Two 10” LPs feature acoustic & home recordings by Gram Parsons from 1969 and 1972, and the third 10” is Emmylou Harris’ first album demos, which she has generously allowed us to offer as a Kickstarter reward. Highlights from these three 10” LPs include "Two Hearts,” a legendary long-lost song of Gram's that has never been heard before, an incredible acoustic performance of "Cody, Cody," and two previously unheard Emmylou songs, "Norfolk" and "Our Father."

Gram Parsons and the Fallen Angels! At the Bijou Cafe in Philadelphia, from March 1973 will be offered on CD and double LP as rewards for pledging when the Kickstarter launches November 17, 2022. The three 10” LPs are limited edition exclusives to the Kickstarter campaign and will be available as individual rewards or in bundles with the Bijou Cafe album.

One of the true visionaries of roots Americana music, Gram Parsons died tragically at the age of 26 in Joshua Tree, CA in 1973, just four months after the Bijou Cafe concert. His short, but storied, body of work has moved countless people, and his early passing has left a giant hole in so many fans’ hearts, including ours. Although he has been gone for almost 50 years, Gram’s music continues to influence artists today and speak to new generations of fans.

CAN I PURCHASE THESE RELEASES ON AMOEBA.COM OR IN-STORE AT AMOEBA?

No. The Gram Parsons Bijou Cafe concert and three 10" LPs are only being offered through Kickstarter.com at this time. You can pledge for these releases via Kickstarter here.

I LIVE OUTSIDE THE U.S., CAN I STILL PLEDGE FOR THE RELEASES?

Due to the complexities and costs associated with international shipping, we are only shipping these releases to the U.S., UK, EU member states, Canada, Australia, New Zealand, and Japan.

Please note: folks living in the Australia, New Zealand & Japan can only pledge for the Vinyl Lovers Bundle or the Complete Bundle. Buyers are solely responsible for any VAT or customs charges.

WHEN WILL THE RELEASES SHIP? 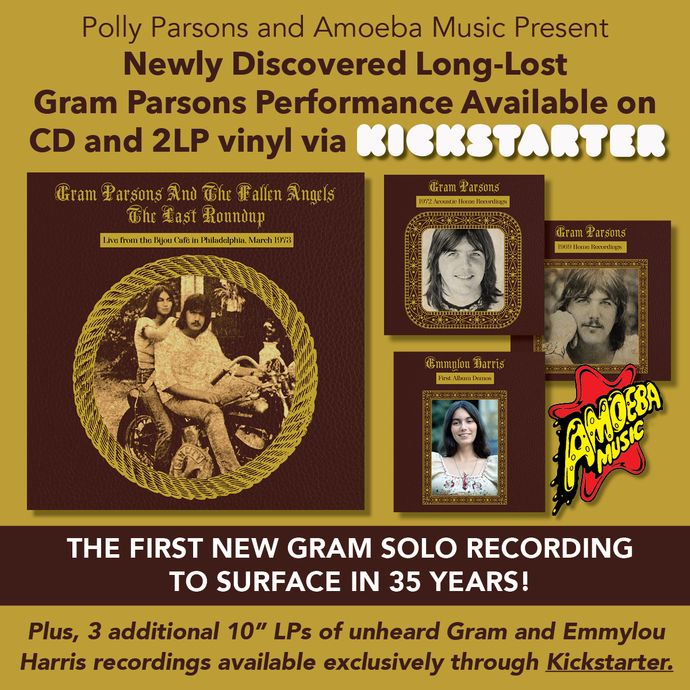