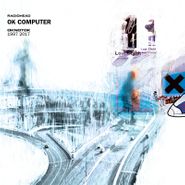 Radiohead’s OK Computer felt like an instant classic from the very moment it came out in 1997 and its mystique and stature have only grown exponentially since then. It is a miraculous, endlessly influential piece of music that helped define not only Radiohead’s legacy and reputation as sonic experimenters par excellence, but also the sound of modern rock well into this decade. It is an album that has also been written about ad infinitum, with no avenue or tangent left unexplored, so 20 years later, what’s left to say? Well, in honor of the album’s two decade anniversary, OK Computer has not only been reissued with a brand new remastered mix, but also paired with an entire second disc of bonus tracks, including live cuts, eight B-sides from the OK Computer-era singles, and three previously unreleased studio recordings. These three songs: “Lift,” “Man Of War,” and “I Promise” have been previously referred to as the holy grail of unreleased Radiohead material, and they more than live up to the hype. “Lift” is the '90s anthem that never was, the Beatles-esque melancholy of “Man Of War” is juxtaposed with The Bends-esque alt-rock, and “I Promise” is an achingly beautiful ballad that marches along unhurriedly, draped in weeping strings and an amazing melody. Altogether, Disc 2 features nearly an entire album of material recorded in the period of OK Computer’s conception which didn’t make the cut, and it is lovingly presented here in this definitive version. Discover and rediscover what makes this album, as well as Radiohead themselves, so incredible.