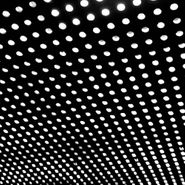 It occurred to me while seeing Beach House play live earlier this year. They played maybe 20 songs from across their catalog of albums with little break in between — flawlessly — and there wasn’t a clunker in the bunch. I got that “I love this song” feeling every time they began a new one. Listening to Bloom in the car, blasting on the stereo at home or alone on headphones feels very much the same. Bloom was the most consistently great album released in 2012, which is no surprise, coming from a band that has built their name on consistent greatness. Its predecessor, the equally great Teen Dream, was stylistically more varied, while Bloom paints with a more basic palette, mirrored by its dichromatic album art. But this isn’t a detraction. Bloom’s high focus is its strongest point. Jumping off from Teen Dream’s lush, Fleetwood Mac-esque “Norway,” Bloom finds the band creating the sort of lush world of sound Stevie Nicks may have seen in her mind across its 10 gorgeous tracks. Perhaps Beach House’s greatest achievement is that Bloom’s sound is created with only a handful of people. Nothing feels overly layered, and for all intents and purposes they still sound like Victoria Legrand and Alex Scally alone in a room, dreaming up their own planet of sound and sharing it with the world. “Myth’s” mellow intricacy leans into the grandiose “Wild,” drunk on its beauty. “Lazuli,” the album’s shimmering centerpiece, takes your breath away with slowly fluttering guitars, dream synths and half-remembered depiction of lost love. Its like a quietly dying memory, someone remembering their love on their deathbed. Its ability to affect while remaining bleary and vague is a stunning achievement, something many songs aspire toward while falling into becoming dismissible. While Bloom’s overflowing romanticism is something to celebrate, so is its remarkable pop precision. “Other People’s” lunging chorus keeps you gripped even as its lyrics spin with “Lazuli’s” lost love and the added warmth of familiarity, of the simplicity of comfort from seeing old friends on Facebook. Every song that follows amazes with some new hook or chorus or some immaculately placed guitar part, like the swooning harmonies that lure you into “The Hours” or Scally’s bold two-note riff in “Troublemaker” or “New Year’s” sudden shuffle. In its closing, Bloom becomes a glass castle of contained emotion, as delicate as their early work but with newfound clarity. “Wishes’” princess-like longing folds into the sea shanty of “On the Sea,” drifting into “Irene,” featuring some of Scally’s finest guitarwork to date while Legrand’s ever-impressive pipes bellow out into the ether.

Beach House continues the upward trajectory set by their previous three album — the haunting, murky lo-fi of their self-titled debut, the more grandiose Devotion and its near-classic follow-up, Teen Dream —with an even fuller, more confident statement on Bloom. The album jumps from the springboard set by Teen Dream’s “Norway” into more definitively pop territory, albeit the sort of cerebral goth-pop pioneered by Kate Bush and Cocteau Twins. Like that song, “Lazuli” emits a sky-searing chorus of Victoria Legrand’s cloudy vocals that is simply glorious, the kind of thing directors dream about hearing in their film’s opening sequences, eliciting sudden and unspeakable emotion. The band combines this with verses that are more mysterious and harder to recall — it’s a perfect example of the band’s strength in fusing archness and pop structure, retaining their intrigue while delivering hooks. Every song on Bloom is a highlight, as the album moves from the cascading keys and chiming guitars of opener “Myth” to propulsive “The Hours” and “New Year,” perhaps their clearest stabs yet at radio-ready pop-rock, through closer “Irene,” which stretches its music-box arrangement to epic proportions, boosted by Alex Scally’s hauntingly spare yet melodically uplifting guitar lines. Every song on Bloom somehow sounds strange and new, yet also feels intimately familiar upon first listen. Listening is like unearthing someone else’s memories, each song like a glittering diamond that has just been waiting to be found.