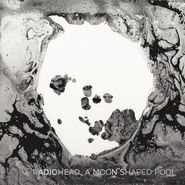 When first putting on "Burn The Witch," the beginning of the Radiohead's new album, you might feel you've mistakenly put on a new Belle and Sebastian single. The slightly twee and plucky string arrangements seem to harken back to a Kinks-y Village Green Preservation Society-era jaunt. But give it a minute and Thom Yorke's trademark silky-gloom fills the village with a hypnotizing sense of doom. "Daydreaming" starts with a minimalist piano line and vocals but slowly builds with mysterious layers to a vast soundscape. With A Moon Shaped Pool Radiohead have proven they've fully transcended the trappings of a '90s guitar rock band and turned into something more akin to a collection of texture, emotions, and sounds; a sort of soundtrack to the 21st century.