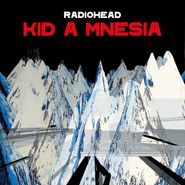 Radiohead has never been a band to take the “business as usual” approach. It’s no surprise, then, that even their reissue projects go above and beyond, sideways, and into uncharted territory. That’s certainly the case with Kid A Mnesia, a reissue of their now classic albums Kid A (2000) and Amnesiac (2001), with a third disc called Kid Amnesiae, consisting of previously unreleased material from both albums’ recording sessions. The Kid Amnesiae material includes different versions of familiar tracks as well as two totally-new-to-you tracks, “If You Say the Word” and “Follow Me Around.” It’s deeply satisfying to return to these albums in a different way and to experience some truly excellent, unreleased songs from the same era. That’s why Kid A Mnesia is vital listening, even if you’ve already got Kid A and Amnesia memorized from beginning to end.