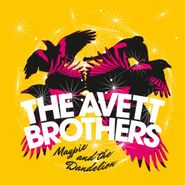 The second Rick Rubin produced full length for this North Carolina folk rock bluegrass revival Grammy nominated group of guys who probably romanticize being drunk and sad. Nice harmonies, wiggly fingerpicking, earnest lyrics and vibes all around. I imagine Rubin as an NBA coach, "We didn't get the ring last year, but we will this year!" It seems like the band has been training, anxious for a do-over, releasing M&TD less than a year after the release of the The Carpenter which sold basically a bazillion copies and was nominated for the aforementioned Grammy. And no wonder! People love this music because people have feelings just like the ones the Avett Brothers pack into their tunes! People rave up with their pals and people sit down and think about stuff (so I've heard), people is folks and folks oughta boogie up to this record, huh?