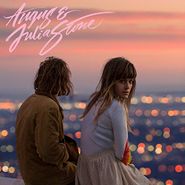 It’s been over three years since folk darlings (and siblings) Angus and Julia Stone joined forces to put out a record. The two of them have been enjoying successful careers independent of one another and had no intention of working musically together again. That was until legendary producer Rick Rubin (Metallica, Adele, Red Hot Chili Peppers) contacted Julia out of the blue about wanting to work with the duo. The result is their most compelling release to date. Working collaboratively on songwriting for the first time, this new self–titled album is a departure from the siblings' folksy MOR pop of the past. It’s more dynamic and blues influenced. Leading track “Heart Beats Slow” sets the tone for the entire album with sweet harmonies and rich instrumentation while “Death Defying Acts” showcases the powerful fragility of Julia’s voice channeling Billy Holiday.