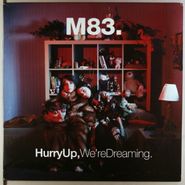 After a decade’s worth of brilliant albums that have been increasingly epic in scope, Anthony Gonzalez of M83 has delivered the masterpiece he has hinted at for years. Gonzalez builds off the life-embracing yet ’80s nostalgic pop of 2008’s Saturdays=Youth across this double-album. Taking a hint from the Smashing Pumpkins’ Mellon Collie and the Infinite Sadness, Gonzalez sweeps through childlike wonder (the children’s story as Kraftwerkian computer-pop of “Raconte-Moi Une Histoire”), adolescent angst (the two and a half minutes of skyscraper-sized orchestral rock in “My Tears Are Becoming a Sea”) and young adult excitement (Gonzalez cries “The city is my church!” in the neon-backlit “Midnight City”) to capture the wide-eyed energy and naivete of youth. There’s newly an emphasis on the kind of shuffling ‘80s funk-pop of the likes of Huey Lewis & the News and Hall & Oates in songs like “Claudia Lewis,” but it actually feels less throwback-ish than some of his previous work, perhaps in part due to contemporaries like Toro y Moi and Neon Indian similarly fusing such sounds with shoegazer aesthetics. Indeed, with the kinds of sonic dreamscapes of albums like Dead Cities, Red Seas & Lost Ghosts and Before the Dawn Heals Us also in tow on songs like “This Bright Flash,” Hurry Up, We’re Dreaming presents us with all of Gonzaelz’s best tendencies, all at once, and at their utmost potential.