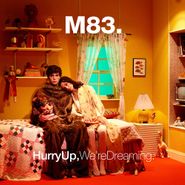 So many anniversary releases just feel like a cash grab; they’re barely any different than the original release, except for, maybe they’re on the “new releases” section for the first time in years. Fortunately for M83 fans, the French group put in the work for their 10th anniversary release of their epic Hurry Up, We’re Dreaming. First of all, this is a limited, one-time-only pressing, featuring the children from the original album cover, but now ten years older, shot in what seems like it could be another room from the original album’s retro dream house. Pressed onto double orange vinyl, the songs sound just as earth-shattering and epic as they did a decade ago. A release that’s both timeless and timely, rediscovering the beauty of M83 is a joyful experience.