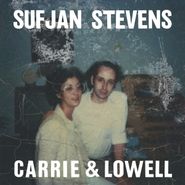 Focused, subtle, honest and beautiful. This album is clearly personal and sounds like a mature culmination of all that Sufjan Stevens has been toying with up to this point. It’s consistent with itself and a powerful listen.

“Death With Dignity” opens Carrie & Lowell as a touching elegy to Sufjan Stevens’ mother, yet it also could describe his relationship to his own music. “I don’t know where to begin,” he sings, and “I’ve got nothing to prove” over a familiar bed of bluegrass-inspired folk. Stevens was like the A-plus student of indie pop, turning out album after album of perfectly manicured orchestral folk-pop, but lost his way a bit with The BQE, an album and project that felt unwieldy, as well the hectic electro-folk of The Age of Adz. Carrie & Lowell, by comparison, is one of his most stripped-down albums to date. That’s not to say it doesn’t have his trademark fixation on detail— songs shift halfway through, like “Should Have Known Better’s” turn into stuttering, laptoppy acoustics and choral touches, or “Drawn to the Blood’s” extended string finale; “you checked your text while I masturbated,” he sings casually, telling a girl she looks like Poseidon in the sexually turbulent “All of Me Wants All of You.” Lyrically and musically, Stevens remains a curious tinkerer, but Carrie & Lowell never feels busy in the slightest. It’s an intensely focused work, one that places Stevens’ voice and songcraft over bells and whistles. Whereas locations and history seemed to hold Stevens’ interest in the past, here he’s death-obsessed (and still spiritual as ever). “Fourth of July” feels romantically morbid and carries the happy refrain “we’re all gonna die,” and on “The Only Thing,” he sounds stricken with grief to the point of barely being able to keep going on. Stevens’ way with language, drawing on mythology and Christian imagery, and ascendant voice keeps the songs from wallowing too deeply, even as they describe an immense sense of loss, allowing those moments when he does break—“No Shade in the Shadow of the Cross’” “Fuck me, I’m falling apart”—to land all the more effectively. Without the filter of a state’s history or the heavy religiosity of Seven Swans, Carrie & Lowell finds Stevens turning his studious eye inward to fully explore his own grief, and the results are never short of breathtaking.