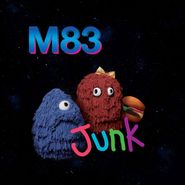 In the time since M83 released its last album in 2011, the smash double-album Hurry Up, We’re Dreaming, the EDM sound Anthony Gonzalez had inched toward has gone fully mainstream — dubstep is the stuff of morning show segments. So forgive Gonzalez if goes harder into the festival-friendly world on his follow-up, Junk, albeit in his own idiosyncratic way. Much like Daft Punk did with their excellent Random Access Memories, Gonzalez seeks inspiration this time around not from the shoegaze of the’90s and dreamy synth-pop of the ’80s as he has before, but rather ’70s-style glam and prog-rock. Opener “Do It, Try It” is a disco slow-burner reimagined for the Coachella set. “Go!” features killer dueling guitar and synth solos. Tracks like “Moon Crystal” indulge a love of soundtrack cheese, sounding like the lost theme song to an ’80s female-fronted TV comedy, while “For the Kids” could’ve come from Bette Midler’s The Rose. If all of this sounds a bit over-the-top, it can be, but Gonzalez pulls things back toward the serious on tracks like the darkly orchestral “Solitude.” Mostly, though, it’s a sharp left turn that ends up paying off in spades. Junk is an album that leaves a huge smile on your face.