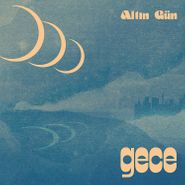 Altin Gün are a Turkish-by-way-of-Amsterdam six piece that creates what they deem traditional folk music, but what can only truly be described as a polyrhythmic, kaleidoscopic funk-rock ritual. Belied by their relatively newness, Altin Gün sound like a band that have been playing together for years, as these songs unfold in a completely organic and intuitive way; all interlocking grooves coming together to create something utterly hypnotic. Mixing traditional Western pop/rock instrumentation such as guitars, bass, and drums (along with plenty of space-age Juno synths) with the electric saz and Turkish modes and scales, Gece is an exotic, psychedelic dance party. Inhabits the same celestial sphere as Yellow Magic Orchestra, Dungen, Flower Travelin’ Band, and Tame Impala.