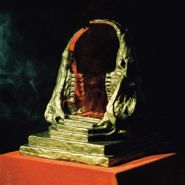 It would be disingenuous to describe King Gizzard & The Lizard Wizard as being merely “prolific.” “Relentless” is a more accurate word. “Possessed” is even better. Since their 2010 inception, the Australian psych rock band has released a whopping FIFTEEN studio albums (and two EPs for good measure), putting the outputs of fellow garage rockin’ workhorses like Thee Oh Sees and Ty Segall to shame. Such an onslaught of material would be utterly exhausting if not for the band’s varied and constantly changing sonic identity. As a group of seven multi-instrumentalists, KG & TLW have the versatility to deftly incorporate elements of prog, folk, psychedelic soul, and jazz fusion into their Oh Sees-inspired nu-krautrock chug. With Infest the Rat’s Nest, add thrash metal to that list. Infest follows this year’s earlier release Fishing For Fishies, possibly the most streamlined album of the group’s career, with another musical left turn as the band dons their old Exodus and Overkill t-shirts and wrecks proper mid-‘80s havoc over the course of half an hour. Shimmering guitars and jazzy flutes are replaced with overdriven Marshall stacks and galloping double bass drums. Guitars chug, trill, and squeal all over the place as the tempo rarely dips below frenzied, especially on songs such as the pounding “Organ Farmer” and excellent album opener “Plan B.” There’s a certain adolescent glee to which King Gizzard attack these rollicking tunes, like a fourteen-year-old guitarist who just discovered hammer-ons and pull-offs for the first time, yet with all the musical dexterity and chemistry that comes from seven dudes playing wacky music together for nearly a decade. At this point it’s hard to imagine what surprising new direction the band could possibly go from here. That being said, King Gizzard hip-hop album incoming?