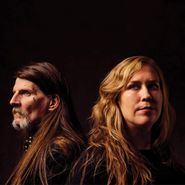 Following the scorched earth doom of Primitive and Deadly, which rebooted ‘96s Pentastar: In The Style Of Demons through fire and brimstone, Dylan Carlson and co. once again use the past as a sonic roadmap. Full Upon Her Burning Lips, the band’s newest record and 9th overall, is possibly the most stripped down work they’ve done since the aforementioned Pentastar, with less studio sheen and arrangements, which make it seem at times that these guitar-heavy meditations are melting in the summer heat. This time round, however, the riffs are far less stoner rock (aside from k-hole Sabbath of “The Colour of Poison”), and more spaghetti western, a staple of Carlson’s guitar playing since Earth’s late career renaissance. It’s unforgivable that HBO didn’t get these guys to soundtrack Deadwood.