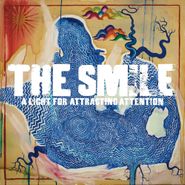 A Light For Attracting Attention is the debut album from The Smile, a new project from Radiohead's Thom Yorke and Jonny Greenwood with Sons of Kemet's Tom Skinner. Produced and mixed by Radiohead stalwart Nigel Godrich and mastered by Bob Ludwig (Radiohead, Bryan Ferry, Leonard Cohen), the album's bright, jewel-like production adds an interesting dimension to the propulsive urgency of the melodies and Yorke's always haunting vocals. Add to the lush texture of the album emotive strings courtesy of the London Contemporary Orchestra as well and vibrant brass from UK jazz artists Byron Wallen, Jason Yarde, Chelsea Carmichael, Robert Stillman, and Theon and Nathaniel Cross. Things never get stale when Yorke and co. are involved and A Light has to be one of the most exhilarating, impactful Radiohead side projects in recent memory.