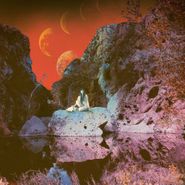 Over the course of their 20-plus years of existence, the band Earth have created an crater-like impact in the world of ambient and drone metal, setting the stage for the genre to flourish with their seminal Earth 2 album and continuing from there on six more albums. But their seventh, Primitive & Deadly, is only the second to have vocals. As the band has evolved to strip down some of the corrosive feedback that marked their early work and have added in more Americana and jazz-based elements, this addition of vocals can just be seen as another development in their sound, especially when they’re so effective. After setting sail on a slow-rolling metallic ocean with “Torn By the Fox of the Crescent Moon,” Mark Lanegan throws his gritty vocals into the mix on the whiskey-soaked “There Is a Serpent Coming” as well as the desert metal of “Rooks Across the Gate.” Lanegan tends to be an ace guest vocalist, as his particularly grizzled voice can add gravitas to something light (his work with Isobel Campbell) as well as it can sound like it’s cracking the earth on a metal album (his work with Queens of the Stone Age), and here, of course, Lanegan’s voice works wonders, selling otherwise silly lines like “I see all the creepin’ crawlies comin’” to help make “There Is a Serpent Coming” the album’s standout track. Beneath Lanegan’s voice, as well as the dusky, dreamy voice of Rose Windows’ Rabia Shaheen Qazi on 11-minute centerpiece “From the Zodiacal Light,” the trio (who are occasionally helped here by Brett Nelson of Built to Spill and Jodie Cox of Narrows) stretch out and allow the compositions’ slow movements to land perfectly. The band only slightly falters on the vocal-free “Even Hell Has Its Heroes”—sure, it’s drone metal, but it still feels redundant to the rest of the album, even as the high-note solos create some thrilling moments. Overall, the album feels gloriously desolate, like staring across Death Valley at sunset as closer “Rooks Across the Gate” dissolves into tremulous distortion.