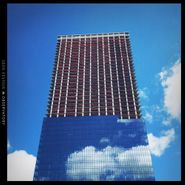 Aeon Station’s Observatory is the debut solo album from longtime Wrens member Kevin Whelan. Written and recorded over fourteen years, the album was born from demos and sketches Whelan created with help from bandmates Jerry MacDonald and Greg Whelan, studio wiz Tom Beaujour (Nada Surf, Guided by Voices), and his wife Mary Ann on backup vocals. Although the album’s titled Observatory, the proceedings have the sense of being a sort of sonic cathedral, with uplifting melodies, sweeping (song) architecture, and passionately bold instrumentation. Cathartic and life-affirming, this album sounds readymade for radio sing-a-longs and outdoor arenas. Guaranteed to transform even your dourest days into jubilant celebrations.