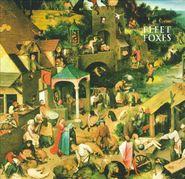 Fleet Foxes’ 2008 self-titled debut full-length really is a gem. We’ve all been up to our ears in folk-tinged indie rock for some time now, so it’s easy to forget just how vibrant, gorgeous, and immersing the Fleet Foxes’ sound was back then…and still is today. How can an album so intricately-crafted sound so cozy and warm? The band’s conducting a symphony of Americana mood and folk harmonies with rich chamber pop melodies over the course of the album’s far-too-short run time. (It clocks in at just over 39 minutes but somehow songs this tantalizing just leave you wanting more.) As the album winds its way along, it’s easy to lose track of time, let the outside world slip away, and dive deep into another, more fervent world—one of Fleet Foxes’ own making.