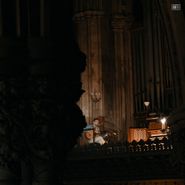 A Very Lonely Solstice is the album version of Fleet Foxes’ December 20th, 2020 concert film of the same name. For fans of the band, it’s pure loveliness. Featuring Robin Pecknold (largely) alone with his acoustic guitar performing within the soaring interiors of Brooklyn’s St. Ann & the Holy Trinity Church, the songs convey a sense of both the solemn and the sacred. The Resistance Revival Chorus opens and closes the performance, the ethereal voices of the women and non-binary singers lending a timeless, ethereal contrast to Pecknold’s plaintive vocals. There’s a cover of The Bee Gees’ “In the Morning” and the traditional ballad “Silver Dagger” that add moments of sunshine-y pop and haunting English folkloric atmosphere. It’s a rare thing when a band’s live album is one of their finest recordings; A Very Lonely Solstice definitely deserves such a high ranking