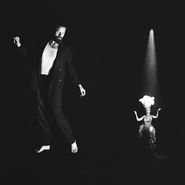 Father John Misty’s got something truly special with his new one, Chloë and the Next 20th Century. Cinematic in scope and earnest in emotion, the album feels like it should be the soundtrack to a sweeping golden age of Hollywood epic. Maybe that’s because of the album’s stellar arrangements; lilting strings, haunting horns, and romantic guitar nod to the orchestral sounds of the ‘50s and ‘60s. A standout achievement that should not only end up on many critics’ year end “best” lists but that will likely earn many spins on your turntable.