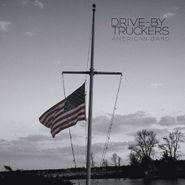 Drive-By Truckers, the American South’s biggest celebrant and critic, unleashes their most political and righteously indignant album of their long career with American Band. Amid the current haze of the baffling election, rampant poverty, police brutality, senseless shootings, the opioid abuse epidemic, widespread xenophobia, and racial tensions, singers/songwriters/guitarists and band founders Mike Cooley and Patterson Hood sharpened their skills for critique, creating this year’s most provocative protest album. Their form of socio-political criticism is straightforward; their words are aimed for the jugular because, let’s face it, we don’t have a lot of time to play with poetics as the country goes up in flames before our eyes. In “What It Means," they take on the tragic collective moral implications of the deaths of Michael Brown and Trayvon Martin: "We're living in an age where limitations are forgotten/The outer edges move and dazzle us/But the core is something rotten." While sonically honoring their roots in all-American Southern rock, Drive-By Truckers remind us that it is truly American to think, question, critique, and to protest.