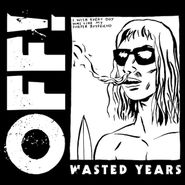 OFF! seemingly came together out of necessity for its musicians, who came up in legendary punk and hardcore bands (Redd Kross, Black Flag, Rocket From the Crypt, Hot Snakes and Burning Brides) and perhaps needed a new outlet. Accordingly, OFF!’s sound is unrelentingly furious, packing legions of hardcore hooks into minute-long bouts.  Sooner or later, though, they’d have to go a bit further, and Wasted Years is the sound of OFF! expanding things without losing the immediacy that has made their work so compelling. After a couple of good ol’ quick bangers, the album digs into some Black Sabbath-style dark riffery (“Legion of Evil”), complex, metallic screeds (“No Easy Escape”) and a song that actually breaks the two-minute mark, the catchy “Hypnotized.” Rather than being banged out as quickly as possible, Wasted Years’ songs sound whittled away until only the core elements remain—“Death Trip on the Party Train” doesn’t need to be a second longer to tunnel its way into your brain. The album is also remarkably consistent, as each of its 16 songs stand out, with second-half standouts like “I Won’t Be a Casualty” and “Time’s Not On Your Side” (Key line: “There’s a 2x4 in my hand slicing my eyes!”) maintaining interest throughout. At this point, OFF! stands with any of its members’ previous bands as a hardcore punk band for the ages.