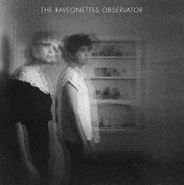 After spending the better part of a decade producing huge, wall-of-sound, Jesus & Mary Chain-style guitar noise, The Raveonettes continue the scaling back of their sound begun on the darker, unfairly maligned Raven in the Grave on Observator. Though it still eschews the campiness that marked much of The Raveonettes earlier work, Observator is a sunnier affair than Raven, full of sparkling guitarwork and Sune Rose Wagner and Sharin Foo’s twinlike melodies. The beginning songs on Observator sound like a back-to-basics approach to their sound, Buddy Holly melodies over tinny beats, but the Ride-like rush of “Sinking With the Sun” and lovelorn single “She Owns the Street” display an interest in jangle pop, without as much of the shoegaze sheen the band used to coat their songs with. This is a more melody-focused rendition of The Raveonettes’ sound, and thus its emotional quality comes through more clearly. Observator’s noise-flecked pop in songs like the glorious closer “Till the End” relay a lonely sense of wonderment, like staring at the stars alone.