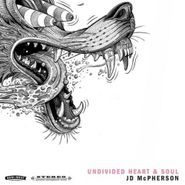 On his third album, JD McPherson switches gears a bit from the throwback, R&B-infused '50s rock that defined his previous two releases. The production quality on Undivided Heart & Soul has evolved from purposefully retro to decidedly modern. Unlike earlier albums, you won’t mistake this upon first listen for a genuine artifact from the golden age of rock & soul. Though McPherson’s playing is largely the same, the crisp production places this album fully in the 21st century; a bluesy, airtight production akin to something Mark Ronson might help craft. The songs themselves incorporate a bit of this modern influence: “Lucky Penny” brings to mind current bearers of the blues-rock torch such as The Black Keys or Cage The Elephant. “Hunting For Sugar” takes what might be a Smokey Robinson ballad and introduces it to neo-soul, with spacey reverb galore and percussion that seems to emulate a sampled break beat. No, JD McPherson doesn’t live in the past, but his music is adept at embodying what makes those old soul records so compelling. On Undivided Heart & Soul, those records get a hi-fi sonic makeover.