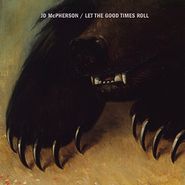 JD McPherson makes no bones about being indebted to the classics—heck, he named his second album Let the Good Times Roll. But McPherson isn’t interested in merely dusting off Sun Records 45s and recreating their sound, successfully putting his own spin on early rock ‘n’ roll on songs like the stomping title track. Rather than reminding you of specific Elvis Presley or Little Richard songs, he uses some of their elements—Jerry Lee Lewis’ pounding piano, Carl Perkins’ crisp tones—as well as some new ones, like the looping, dirt-crusted acoustic guitar and electric guitar ambience on the rollicking “Bossy.” Together with producer Mark Neill, McPherson crafts a neat palette of horns and percussion to growl over in “It’s All Over But the Shouting,” while a healthy dose of garage vigor helps “It Shook Me Up” stay true to its name. With production that begs for headphones, McPherson sounds spot-on as a ’50s-style rabble-rouser transported to a modern-day studio, which in and of itself is a difficult feat. But the fact that the music is so enjoyable is a tribute to McPherson’s talents—that snarling tenor doesn’t hurt. With Let the Good Times Roll, McPherson gets past wearing his influences on his sleeve and does one better than rock revivalists like The Black Keys or Mark Ronson. He’s the real deal.