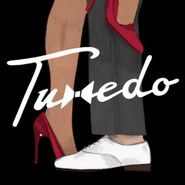 The prolific and diverse hip-hop producer Jake One has teamed up with blue-eyed soul singer Mayer Hawthorne for a new collaboration entitled Tuxedo. Their alter egos - Aquarius (Mayer Hawthorne) and Taurus (Jake One) - are dressed up in tuxedos and presented by Stones Throw founder Peanut Butter Wolf (a man known to dress up himself) as descendants of the one-word moniker family of funk, where you will find groups such as Chic, Shalamar, Plush, and Zapp. It's a retro disco funk record that will have you busting out your own tuxedo and dusting off those dancing shoes.