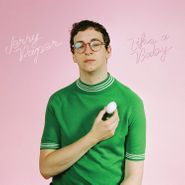 Jerry Paper is not glitching, he’s just undergoing regularly scheduled maintenance. Originating as a semi-anonymous, somewhat Brian Eno-toned crooner that purported to be the pseudonym of “the entity that inhabits Lucas W. Nathan's body,” his music served to make pop melancholy feel cold and alien. Clinical yet not robotic, and using a strikingly artificial sonic palate seemingly derived from Windows 95 sound effects and old Garageband presets, Nathan, or rather, Paper spent the first half of this decade tweaking this formula until 2016’s Toon Time Raw, which for the first time introduced a live band and non-synthesized instruments into the mix. Unlocking the secretly jazzy, funky sensibility within the heart of Paper’s music, this radical change in timbre represents an artistic evolution of sorts, not unlike a robot programming itself to be more and more human. Like a Baby furthers that evolution, with arrangements closely emulating '70s soft rock smoothness yet with Paper’s abstracted, outsider-looking-in lyricism and half-asleep lounge delivery. It’s a new look, lush and full of tasteful saxophones and electric sitar, but Jerry Paper remains Jerry Paper behind the mask.