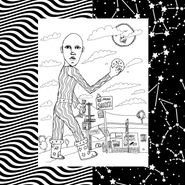 Shapeshifting LA producer Ringgo Ancheta releases the second of a two part odds-and-ends collection. In his own words, “Albums should be proper meals, but every now and then a snack can really hold you over.” With that last proper meal of sorts being 2016’s Body Wash, a heavily retro-ized and synthesized R&B affair that represented a bit of an artistic deviation for the artist, Ancheta returns to the hazy beats he’s most known for. Without denigrating Body Wash, which was an admirable pop experiment, Snaxx excels for this reason; with a sound as comfortable as a fitted glove, Ancheta is an expert at making densely layered instrumentals appear effortless and effervescent. Like many other beat makers, Ancheta heavily draws on funk, R&B, and hip-hop, yet he uses these influences to veer off in entirely different directions from his contemporaries. Nowhere near the wonky stutter of Samiyam, nor the space age dub of Ras G; the Mndsgn calling card is a surreal interpolation of AOR, jazz-fusion, and other chintzy discarded sounds from yesteryear. Under a layer of thin tape hiss, these grooves warp into one another, sounding as if they’re being beamed in from some bizarro late night FM radio transmission. Many producers have sampled Frank Zappa tunes before; Ancheta is the only one who actually incorporates his cosmically zany, short-attention span approach to music.