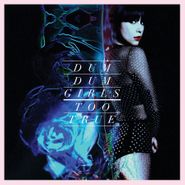 The time is right for Dum Dum Girls to make their big breakthrough record, and they don’t squander the opportunity with Too Pure. Singer Dee Dee Penny is like the shoegazing version of Chrissie Hynde, turning around a cliché about an irresistible bad boy on “Too True to Be Good” and owning her own leather-and-lace sensitive bad girl image in the delicate “Trouble is My Name.” Richard Gottehrer (the producer behind “My Boyfriend’s Back”) brings the magic he brought to Blondie and The Go-Gos to gleaming new wavers like “Rimbaud Eyes,” while co-producer Sune Rose Wagner’s (of The Raveonettes) effect can be felt on songs like sinister stomper “Cult of Love.” The band’s shimmering guitarwork, Penny’s terrific, breathy vocals and her producers’ ethereal touch come together masterfully on “Lost Boys and Girls Club,” which is like a lost song from a John Hughes movie soundtrack, were it made with the noise pop knowledge gleaned from growing up on Nirvana and Slowdive. Too Pure has bite and sheen in equal doses, leaving lipstick smeared on your heart. You’ll be begging for more.