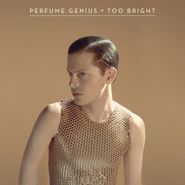 Aptly named third album from Seattle based Mike Hadreas. With his previous output Hadreas had depended heavily on his lyrical prowess to shine through his sparse piano compositions. With tracks like “Queen” and “My Body” the lyrical dependence of dealing with his place in society as a gay man remains, but the self-effacing and fearful panic is barely contained. Instead, it is let out in focused evanescent bursts. Aided by the production of Portishead’s Adrian Utley, Too Bright is a perfect example of an artist catching up with his thoughts and being able to express his deeper feelings through his craft.