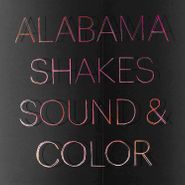 Alabama Shakes’ 2015 Grammy-winning album Sound & Color expanded the band’s retro-soul sound into an artsier kind of garage-blues that overflows with flavors of psychedelia, cowpunk, funk, jazz and more. Fiery tracks like “Dunes” and the massive single “Don’t Wanna Fight” mix impeccably with the gospel-tinged ballad “Over My Head” and the spacey magic of the title track – the whole set buoyed by the enviable voice of singer/guitarist Brittany Howard. Now this groundbreaking album has received a deluxe reissue that features previously unreleased tracks, b-sides and live recordings, as well as new artwork by Frank Harkins.