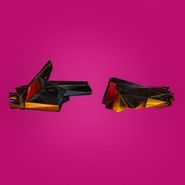 Like its predecessors, Run The Jewels’ RTJ4 is rooted in hip-hop fundamentals while extending its reach into various new worlds. The dynamic duo of Atlanta’s Killer Mike and Brooklyn’s EL-P let loose over brilliant beats with guest collaborations from Pharrell Williams, Zack de la Rocha, Josh Homme, Mavis Staples, 2 Chainz, and DJ Premier. RTJ4 represents the next step in Run The Jewels’ evolution, taking them from the biggest underground group in the world to the best rap group in the game.