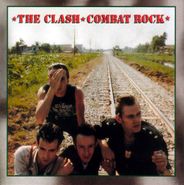 The fifth album by legendary British punk and rock band The Clash, Combat Rock is their de facto swan song, since both Mick Jones and Topper Headon were absent for 1985's horrid and largely forgotten Cut the Crap. Not that Combat Rock is a perfect document, either. It's one of the most top-heavy LPs ever released, with all of its singles and finest album tracks on side one. During the age of vinyl and cassettes, most listeners simply re-played the incredible string of six songs that open the record. "Know Your Rights" is among the best anti-authority songs ever, punk-fueled rockabilly single "Should I Stay or Should I Go" hit #45 in America and remains a rock radio staple, and ragga-tinged new wave anthem "Rock the Casbah" reached #8 on Billboard. Combat Rock's first side closes with the magnificent, heady Viet Nam tale, "Straight to Hell," perhaps The Clash's greatest piece of artistry. Strewn among these classic cuts are worthy tracks "Car Jamming" and the Taxi Driver-referencing "Red Angel Dragnet." While side two is disappointing in contrast, "Overpowered by Funk" is a compelling mixture of Bowie's plastic funk and the skeletal tribalism of The Slits. "Atom Tan," meanwhile, is hard-grooving rock 'n' roll reminiscent of London Calling. Dubby numbers "Sean Flynn" and "Ghetto Defendant," however, bear too much waste-oid kinship to side three of Sandinista!. The Clash rebound with the easily likeable "Inoculated City," before going out with something of a whimper with "Death Is a Star." However, the mild shortcomings of the last half of the album are more than compensated for by its stellar beginning. Top 10 on both sides of the Atlantic, Combat Rock is essential listening.