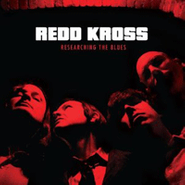 Ever since making the best teen-punk album of all time, 1982's Born Innocent, the fun-loving brothers McDonald have continued to improve their songwriting and their chops, kicking out wonderfully tuff, snotty guitar albums like Neurotica and Phaseshifter. They are in absolute top form on their latest, a great blast of Replacements-meets-Cheap-Trick backyard stadium rock bursting with fuzz and hooks. One of L.A.'s greatest bands shows how it's done!

Founded 34 years ago during the first wave of LA punk rock by two brothers (then 15 and 11 years old), Redd Kross cut their teeth opening for Black Flag at a middle school graduation party. Researching the Blues is the first new Redd Kross album in 15 years. The album balances its tunefulness and bite as well as on classics like Third Eye, sounding beamed in from another time as the album finds the band doing what they do best — no ill-fated electronic experiments here, just heavy melodic rock, from the garagey title track to the surprisingly delicate power pop of “Dracula’s Daughter.” Kneel before Redd Kross!