Visit Amoeba SF Thursday 11AM-4PM and Friday & Saturday 1PM-7PM and check out the High Fidelity station for some interactive fun and promo items (while supplies last).

Amoeba Hollywood will have the High Fidelity action with interactive station and promo item giveaways happening from 1PM-7PM Thursday through Saturday. Come by (or listen in) on Friday between 3PM-7PM when STRYKER & KLEIN broadcast LIVE from the Amoeba stage on the World Famous KROQ 106.7 FM!

Plus, Hulu has partnered with music education nonprofit Little Kids Rock to help raise awareness for music education! Hulu will donate 50% of all gross sales from Amoeba and other participating record stores over the course of the three-day promotion to Little Kids Rock, which transforms lives by restoring, expanding, and innovating music education in our schools. Their network of thousands of K-12 teachers across 45 states leads a national movement that brings innovative and inclusive music education to students.

A departure from Nick Hornby’s 1995 novel and beloved 2000 film, Hulu’s High Fidelity centers on Rob Brooks (Zoë Kravitz, who also serves an executive producer), a female record store owner in the rapidly gentrified neighborhood of Crown Heights, Brooklyn who revisits past relationships through music and pop culture, while trying to get over her one true love. All 10 episodes of the series launch Friday, February 14, only on Hulu. High Fidelity also stars Da’Vine Joy Randolph, David H. Holmes and Jake Lacy. 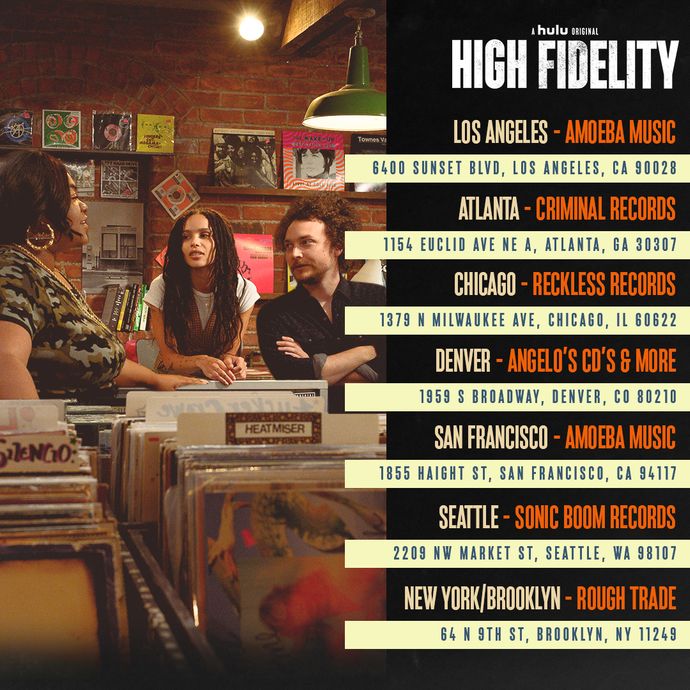