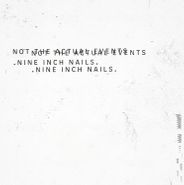 It may be a bit obvious to call Not the Actual Events cinematic or soundtrack-like, considering not only is this the first NIN record to feature Atticus Ross, who has scored multiple films with NIN mastermind Trent Reznor, but also track 3, "She's Gone Away," will now forever be associated with the most bonkers episode of the new Twin Peaks series -- perhaps one of the most bonkers moments in all of TV history. Still, with its hypnotically repetitive rhythms, textural guitar and synth lines, and invasive, growling vocals, one can't help but be transported into an atmosphere and a place, however abstract, designed by Reznor and Ross. Whether it be the John Carpenter-esque electronic beat of "Dear World" or guest Dave Navarro's attitude-drenched guitars on "Burning Bright (Field On Fire)," there's a ritualistic feel to each song that begs to be matched with a moving, visual element. Keep your ears open for the rocker of the album, "The Idea Of You," featuring Dave Grohl's sharply manic drumming.