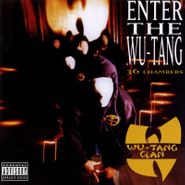 Heavily influenced by old martial arts films, Islamic teachings, and Eastern philospies, Enter The Wu-Tang 36 Chambers is chock-full of mysticism with comic book like super heroes delivering New York slang in a free-associative form. Taking their name after the Wudang Mountains, home to famous Taoist temples and a hotbed for martial arts in China, the Wu-Tang Clan are a worldwide phenomenon. Hailed by many music critics as the greatest Hip Hop group ever, Wu-Tang Clan not only popularized the lo-fi sample style of producer/founder RZA, but also launched the solo careers of all 10 members in an unprecedented business model. As in the words of Ol' Dirty Bastard, "Wu-Tang is for the children!"