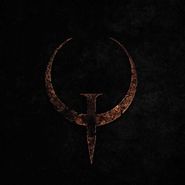 Nine Inch Nails' soundtrack for the influential 1996 videogame Quake has received its first official release outside of the game's original CD-ROM. The dark, ambient soundtrack, a precursor to Trent Reznor's award-winning film score ventures with Atticus Ross, is now available on 180-gram vinyl. Whether it's crushingly sinister ("Main Theme") or ominously pulsing ("Parallel Dimensions"), the unnerving score is perfectly attuned to this early first-person shooter game in which the players were stalked by monsters inside a maze.