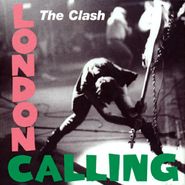 As the 1970s came to a close, The Clash put their punk roots behind them (mostly) and concocted one of rock's all-time great albums, London Calling. The UK punk scene they'd helped build was dying fast, but, with their third album, The Clash leaped right out of its mass grave. Throughout the double-LP, the band effortlessly combine rockabilly, reggae, pub rock, R&B, and just enough of the reckless energy of punk rock to inject the music with the hot spark of abandon. Far more than a collection of genre forays, all of the songs on London Calling integrate these styles into a sound that is The Clash's own. The opening title track takes the up-stroke guitar stabs of reggae and turns them into apocalyptic post-punk menace. "Jimmy Jazz," meanwhile, is drunken lounge music filtered through UK ska. Montgomery Clift tribute "The Right Profile" features big band-style blasts of brass, "The Guns of Brixton" is dark and dubby, and piano-driven "The Card Cheat" recalls the classic rock of The Band and Derek and the Dominoes. This divergence of sounds, coupled with chaotic recording sessions helmed by a chair-throwing producer, should have resulted in unlistenable chaos. Instead, London Calling is the most perfect of messes, wherein every missed note, rushed tempo, and improvised growl lands in exactly the right place. Thirty years on, London Calling remains magnificent, vital, and utterly inimitable.