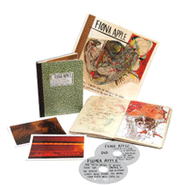 Deluxe Edition CD/DVD package includes The Idler Wheel CD in a 5.5" x 7.5" 40-page book filled with Fiona's lyrics, drawings and sketches, along with 2 personal photographs and a fold-out album poster. The bonus DVD contains footage of Fiona performing five songs live from her first tour in 5 years, shot at SXSW in March 2012.

She’s back and verbose as ever, with an album title longer than most indie rock songs entire lyrics. Perhaps in part due to her prolonged but ultimately triumphant effort to release her last album, Extraordinary Machine, Apple sounds uninterested in storming the radio with The Idler Wheel. She’s after something bigger here, and she largely achieves it on what might be her best album yet. Lyrically, she exposes her greatest wounds and digs at them with extraordinary candor and self-directed venom. “I root for you, I love you, you you you you” she sings on one of her lovelier tunes, “Valentine,” but even then, that devotion has a desperate tone that makes it hard to take at face value. Similarly, on “Jonathan,” lines like “I like watching you live” are accompanied by a fairly dissonant arrangement, deranged drumwork by collaborator Charlie Drayton and musique concrète that makes the whole thing sound like a ship coming apart. Vocally, Apple has never sounded stronger, scarier and more assured, frequently unleashing shiver-inducing cries, growling and singing with unchained vibrato within the same breaths, on songs like the searing “Left Alone.” And just when things get too grim, she closes the album with a jazzy, sexy ode to a guy who cuts through her like a “hot knife.” From start to finish, across its jagged edges and soaring heights, Idler Wheel is an exhilarating, simply astonishing listen.