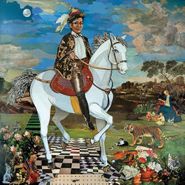 Neon hued, highly ambitious, Lighght is an album carrying the torches of acts like Roy-Wood-era ELO and the Penguin Cafe Orchestra. Which is to say, detail oriented art-pop with a structural reliance on musical interactions found primarily in classical music. And, like the two aforementioned torch-lighters of this genre, Kishi Bashi manipulates and layers recordings of violin and other pseudo-orchestral performances to create swewed, otherworldly ecstasy, swollen with rainbow colored classicism that occasionally recalls the Books as they were first gaining momentum. I hear aspects of Yes vocalist Jon Anderson's '80s work with Vangelis, too. Both projects share an interest in tumbling, unraveling, anthemic pop with a heavy debt to "world music." On Lighght what this means is generally the same simulacrum-Africana handed down from Paul Simon to Vampire Weekend before it became a mass-market genericism. By being so detail oriented, Kishi Bashi generally avoids this trapping, borrowing more from latter-day Of Montreal for its dance floor barn stormers. No surprise, given that Kishi Bashi spent time as a jack-of-all-trades on tour with Elephant 6 pop royalty. Again, an impossibly ambitious album of dense but ever-weightless classical art-pop with enough day-glo hookiness to snare even the most cynical listeners, much like ELO.