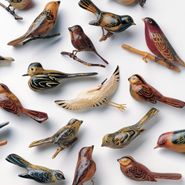 The eclectic, shimmering Americana styling of Kaoru Ishibashi, better known as Kishi Bashi, finds deep rooting in his latest, Omoiyari. Ruminating on the internment of Japanese Americans by the U.S. government during the second World War, Ishibashi paints portraits of humanity in the face of oppression and adversity, that reverberate thematically with many current events in this country today. Some songs are directly in reference to the internment camps, as in the bittersweet love song "Summer of '42," and "F Delano," a critique of then president Franklin Delano Roosevelt's decision to enact the internment of over 100,000 American citizens of Japanese descent, while others paint a more universal sense of the human condition. Though a potentially heavy listen, Ishibashi's inherent sense of wonder and empathy keep the album sparkling in texture, and swelling with symphonic grandeur, especially when playing his trademark, multi-tracked fiddle. "A Song For You" brings to mind Andrew Bird, with its folk rock whistling, and "Angeline" is a straight up indie-folk hit.