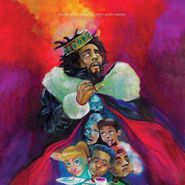 To hear his detractors tell it, J. Cole is not cool. He’s at odds with at least a few of the eminently “it” stars of Soundcloud rap (Lil Pump and Smokepurpp, take a bow) and KOD’s earnest admonitions against drug abuse might come across as positively D.A.R.E-esque when compared to the severely libertine attitude towards narcotics that much of popular hip-hop harbors; its fascination with Xanax, Lean, and Opiates, among others. Yet addiction is a very real thing, and J. Cole, son of an addict, understands this as well as anyone. KOD, which alternately stands for Kids On Drugs, King Overdose or Kill Our Demons, is a cynical commentary on the current hip-hop landscape, delivered with sermonized ardor by Cole. In a lyrical approach alternating between earnest pleas and satirical imitation, Cole tackles a whole manner of vices that, while not endemic to hip-hop as a whole, are at least particularly spotlighted by the genre. There are the easy scapegoats of drugs, wealth, and violence littered alongside portraits of infidelity (“Kevin’s Heart”), virtual lust as manifested by Instagram DM’s (“Photograph”), and as close to a diss track as you’ll ever catch this rapper doling out in “1985.” Musically, the album is sparse, stripped-down, and frequently foreboding, with a subtle jazzy influence throughout. The closest sonic comparison would be last year's DAMN., but KOD often strikes a dourer note than Kendrick’s moralizing tour de force. That’s not to say the album ain’t funky, though. “ATM,” “KOD,” and “Motiv8” turn deceptively simple beats into endlessly groovy templates for Cole to deliver his dexterous screeds over, while the boom bap of “FRIENDS” is enough to get any hip-hop purist’s head nodding. J. Cole’s KOD makes a catchy, convincing argument against the glitzy, glorified hedonisms of the modern world. Just don’t invite him to your next Bacchanal.